A ringing success! Kielder osprey chicks are ringed and named

July is an exciting time for everyone involved with the Kielder ospreys when we get up close and personal with the new arrivals as the chicks are named and ringed.

Ringing osprey chicks is no mean feat as it involves a 30 foot climb by one of Forestry England’s qualified climbers who retrieve the chicks from the nest and lower them carefully in the bag to waiting Consultant Ornithologist, Martin Davison.  Each chick is then weighed and measured.  Although this is not an exact science it helps in determining whether the birds are male or female because females are generally larger and heavier.

Coloured (blue for 2020) and numbered rings are fitted to the young ospreys’ legs.  These rings will help identify the ospreys in future and allow their progress to be monitored.  Through the ringing process it has been possible to determine that 2020 is the best year so far for returning ospreys, with three individuals who were born in Kielder making their way back this year.

Finally the chicks are named - this year’s chicks have been named after Northumberland places beginning with D.  In total there are ten new arrivals this year - 4 males and six females from five nests.  The 2020 roll call is:

Last but not least, news of Nest 7 from Wayne Penrose, Forestry England Ecologist and climber.  Wayne said “It has been particularly exciting to assist with the ringing at Nest 7 – a new nest on a pole which was only erected earlier this year and the first breeding attempt for the newly formed couple.”

Wayne continues, “Having supervised the pole going in and putting the nesting platform in place, it was a privilege to climb up to the nest and to meet the chicks in person.”

The new mother (KX7) at Nest 7 is three years old and from a nest near Tain in the Scottish Highlands.  This is her first ever breeding attempt.  The father (KM18) previously bred for two years with another female on Nest 3 but switched allegiances this year to set up home with KX7.  The new pair produced three eggs in total, although only two of them hatched - resulting in a male/female combo.

The female was given colour ring Blue 213. She is named Donkleywood after a small hamlet above the North Tyne just after it flows out of Kielder Water.  Donkleywood weighed in at a whopping 1890 grams.  This is very heavy, even by female standards.   The male chick was fitted with colour ring Blue 214 and is named Dally after the remains of a 13th century motte-and-bailey fortress by Chirdon Burn, which is in the south of the Kielder Forest area.  Dally is very small in comparison to his sister weighing in at a mere 1390g, light for a male at his age.

Lynn Turner, Director of Kielder Water & Forest Park said “The Kielder ospreys are now a firm fixture in our area's wonderful wildlife calendar. Thanks to the efforts of our partners, there is a good chance that visitors will catch a glimpse of an osprey soaring in the air or swooping to catch a fish in Kielder Water.”

While Covid-19 has meant that Kielder's Osprey Watch hasn't been able to operate this year, you can still get to know all of this year’s new arrivals and follow their progress through the Kielder Osprey Project Partnership blog at https://kielderospreys.wordpress.com/blog/. 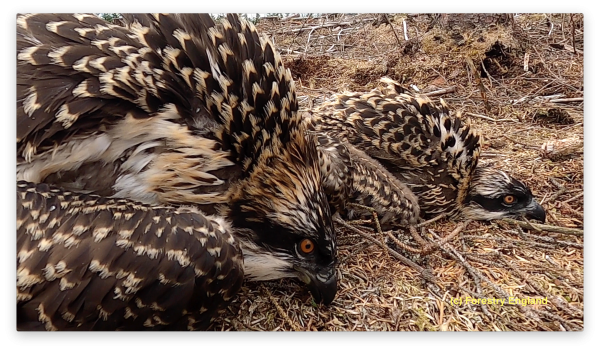